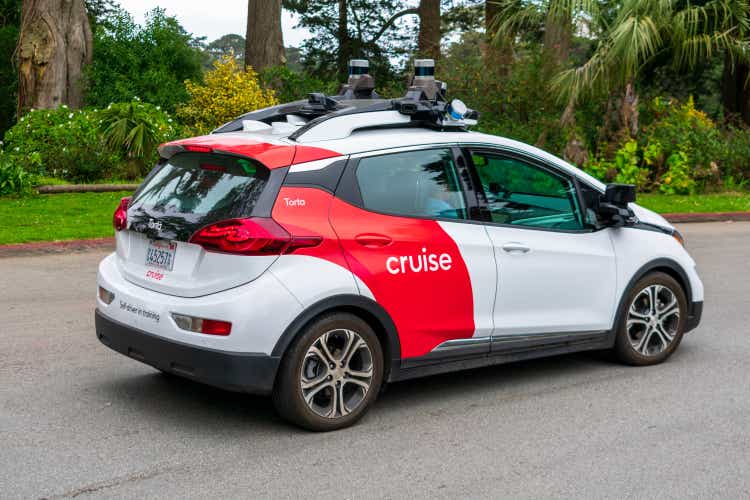 The research and development of autonomous driving undertaken by General Motors Co. (New York stock market :NYSE: GM) has been eclipsed later, at least in public and media perception, by activities involving the migration of internal combustion engines – ICEs – to BEVs.

From an investment perspective, GM’s standalone business thus far has largely been a story of massive development costs and overcoming technical hurdles – and little or nothing in revenue or revenue gains. profits. A change is coming as GM has successfully launched a commercial robotaxi service in San Francisco, albeit on a very small scale.

A San Francisco-based startup founded in 2013, Cruise was bought by GM in 2016, reportedly (but never confirmed) for around $500 million. The company, which employed about 40 people when it was acquired, now employs about 3,000 and has been given responsibility for GM’s own technology development as well as commercialization. GM has brought in additional investors, including Honda Motor Co. (HMC), and now owns 80% of the company, which was last valued at around $30 billion.

While other companies, including Alphabet (GOOG) (GOOGL)-owned Waymo, are operating autonomous robotaxis on a pilot and commercial basis, mostly in less dense locations, Cruise claims to be the first to do so commercially in a large American city. , following the issuance in June of the first California permit to offer autonomous journeys for payment.

According to Vogt, who presented at a Goldman Sachs-sponsored conference last week, customers seem generally happy with the service:

“We’ve peaked at over 70 AVs running simultaneously – driverless AVs running simultaneously. We’ll probably double or triple that by the end of the year. And it’s in use all the time. In the first half of the year, I’m proud of that stat like our 28 day retention so people coming back after a month is almost 50% And to put that in perspective that’s almost as good as a business of mature ridesharing today, and we’re only months away from that service.”

The deployment to San Francisco was not without incident. On June 3, a Cruise vehicle collided with another vehicle at an intersection while making a left turn, resulting in minor injuries. Cruise said the other vehicle was accelerating and then updated programming that controlled left turns not protected by a traffic light. Also that month, a number of Cruise AVs blocked traffic for two hours at an intersection.

According to Vogt, the company is ironing out technological “pain points”. For the first time in eight years, he said, technology is not the bottleneck on the road to commercialization. The new bottleneck, he implies, is Cruise’s unproven ability to scale operations in other cities and increase the number of vehicles it dedicates to carpooling – in pursuit of profitability.

For now, Cruise uses Chevrolet Bolt electric vehicles for autonomous operations. Cruise intends to move from a traditional passenger vehicle such as the Bolt to GM’s purpose-built people carrier, the Origin – an odd-looking vehicle that lacks a steering wheel and other traditional control devices.

“The Origin is a real vehicle now,” Vogt told the Goldman Sachs conference, “and we’re currently testing it on closed courses. It actually drives itself here. It took a tremendous amount of effort to bring this new vehicle. It’s got a whole new sensing and computing platform, which you’ve been working hard on. It obviously has new doors and new screens. It’s got a low-cost architecture, and it’s been validated using a stimulation-first approach, not millions of miles of testing.” GM said the battery-powered Origin would be manufactured at its Detroit-Hamtramck assembly plant.

According to Vogt, Origin is designed for low cost and should last 1 million miles, compared to a vehicle like the Bolt, which needs replacing after around 200,000 miles. Cruise is working on low-cost sensors and custom semiconductor chips, he said. Eventually, Origin could be sold to individual consumers.

“The Origin is a real vehicle now, and we’re currently testing it on closed courses,” he said. “It’s really about autonomous driving here. It took a lot of effort to develop this new vehicle. It has a whole new sensing and computing platform, on which (we have ) worked hard. It obviously has new gates and It has a low-cost architecture and it was validated using a first-of-its-kind approach, not millions of miles of testing.

As for migrating beyond San Francisco, Vogt says the software developed for the Bay Area is highly adaptable to other cities. The clearance, which took 33 months in California, is taking a few weeks in the next markets of Cruise, Phoenix and Austin – which are expected to begin operations before the end of the year.

“What really excites me is that we’re going from zero footprint, no maps, no ground infrastructure – to our first revenue-generating driverless journeys in about 90 days. It’s something people were thinking could take years.’ said In Phoenix, Cruise will work with Walmart (WMT) – a $2.75 billion investor – on package delivery.

Deployment of BEV technology in the mainstream market faces an uncertain timeline, dependent on much better charging infrastructure and questions about consumer acceptance of vehicles that may initially be more expensive to own than models. standard ICE. GM said it will sell 1 million BEVs (including China) by 2025 and aspires to have an all-BEV fleet by 2035. In the United States, much may depend on government incentives and development a reliable battery and mineral supply network. they need for manufacturing. The profitability of BEVs for GM and other automakers remains another mystery that only time will solve.

Now that Cruise’s San Francisco pilot is migrating to real-time, with two more markets set to kick off, the financial potential of autonomous technology can soon be assessed. The enthusiasm of GM’s top executives should not influence investors too much – the figures will be available shortly. But if Cruise’s Phoenix and Austin prove successful, there’s no doubt that GM will ramp up its plans and spending.

I’ve been cautious about GM thus far and I remain so, assessing it as a catch. But I’ll be watching closely for signs that autonomous technology continues to deliver on the promise of a decade ago, when the industry realized the billions – and possibly trillions – that will be made once our cars learn to drive safely.

Revenues and profits up at Mytheresa