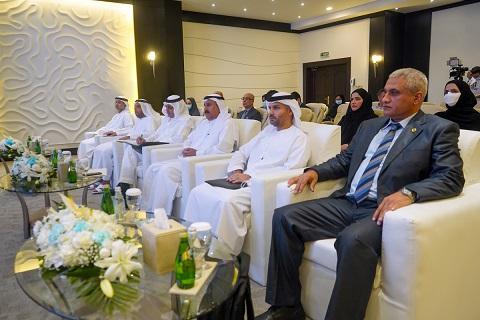 The Board of Trustees of the Sharjah Prize for Public Finance – the first of its kind in the Arab world – has announced the launch of the second round of the prize, organized by the Sharjah Finance Department (SFD), in cooperation with the Organization Arabic for Administrative Development. It comes after the award was suspended for four years due to the exceptional circumstances of COVID-19. This year’s award includes 17 different institutional and individual categories, technical and organizational entry requirements and award nomination criteria.

The awards were announced at a press conference held by the board of directors in the presence of media professionals and partners in the theater room at SFD headquarters on Thursday 11 August. Were present at the press conference, His Excellency Salem Yousef Al Qaseer, Chairman of the Council, and His Deputy, His Excellency Dr. Nasser Al Hatlan Al Qahtani, Director General of the Arab Organization for Administrative Development, His Excellency Waleed Al Sayegh, Managing Director of the SFD and Member of the Board of Directors of the Prize.

His Excellency Salem Yousef Al Qaseer expressed his pride in launching the new cycle of the award, which aims to strengthen and enable the success and sustainability of the financial sector in Arab countries, by assessing the level of commitment to standards and requirements of excellence in the financial work of government by institutions and individuals .

He stressed that the objectives of the award are in line with the directives of the government of Sharjah under the leadership of His Highness Sheikh Dr Sultan bin Muhammad Al Qasimi, Member of the Supreme Council and Ruler of Sharjah – may God protect him – to enable and combine efforts to develop the skills, experiences, cultures and creative abilities of individuals by creating value in companies. He said this would lead to an economy that works to build an integrated nation with consciousness and knowledge to achieve sustainability and societal well-being.

For his part, His Excellency Dr. Nasser Al Hatlan Al Qahtani, Vice Chairman of the Board of Directors and Director General of the Arab Organization for Administrative Development, explained the role of the award in developing and improving the concepts of public finances. in the Arab world, and enabling policies and strategies related to public finance, praising Resolution No. (16) of the Sharjah Executive Council for 2022, regarding the formation of the Board of Trustees of the Sharjah Award for Public Finance. He expressed his satisfaction for the reassignment of the Arab Organization for Administrative Development, in coordination with the SFD, to carry out the technical management tasks of the prize in its new session and to implement the marketing and promotion work in all Arab people.

He said that as part of the development plan for the award, the number of participation categories has increased to 17, including nine institutional categories and eight individual categories, with the expansion of the list of targeted candidates from Arab countries and institutions, as well as price development. guide terms and conditions and standards, to be more compatible with current financial and economic changes.

Nominations are now open and can be made by visiting the website – www.sharjahawardpf.org – and completing the nomination forms before the end of January 2023. The relevant committees will review nominations in February and March 2023, and the results will be approved by the Award Board in April 2023. Introductory Workshops and Forums for the Award are scheduled from October to December 2022, while the Award Ceremony will be held in early May 2023.