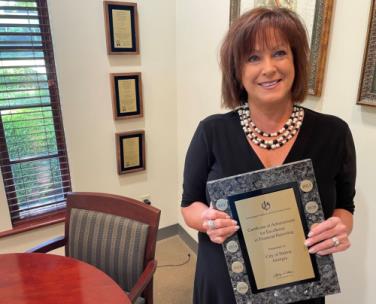 For the 19th consecutive year, the City of Dalton’s finance department is honored for excellence in the management and accounting of the city’s books. The Association of Government Financial Officers of the United States and Canada announced that Dalton has again received the Certificate of Excellence in Financial Reporting for the city’s comprehensive annual financial report covering fiscal year 2020.

The CAFR is more than just a budget document. The comprehensive report contains over ten years of historical data on city financial trends as well as statistics and other data. The document includes a forward that details the city’s accomplishments over the past year as well as an overview of the city itself. The document also includes a discussion and analysis of the city’s financial management during the year covered, including budget changes and other information. Reports are submitted to the State of Georgia where they can be viewed on the State Auditor’s website. The city’s latest 14 CAFRs are also available for review on the city’s website at daltonga.gov.

After each year’s report is completed and submitted to the state, the CAFR is also submitted to the GFOA for review. A GFOA statement announcing the award notes that the city’s CAFR was reviewed by an impartial panel for its adherence to the program’s “high standards, which includes demonstrating a constructive ‘spirit of full disclosure’ to clearly communicate its financial history and motivate potential users and user groups to read the report. The press release states, “The Certificate of Achievement is the highest form of recognition in the field of government accounting and financial reporting, and earning it represents a significant achievement by a government and its leadership.”

The award and the CAFR itself show that the city’s finance leaders and staff strive to be good stewards of taxpayers’ money.