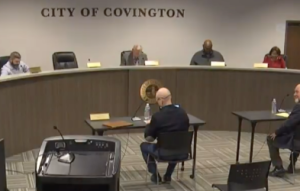 An external review of the city’s finance department revealed 55 high-priority recommendations for change, including major upgrades on everything from creating standard operating procedures for employees to providing more training on internal software .

Representatives from the Chicago-based Baker Tilly Company made the presentation at the Commission’s regular legislative meeting on Tuesday evening. But they first started by saying that the employees in the department “really want to do a good job”, are passionate and work long hours.

But, as Mayor Joseph U. Meyer noted, there have been two separate major theft incidents in the department in the past 10 years. According to Baker Tilly, changes need to be made.

The findings of their report include recommendations such as:

Create standard operating procedures for each employee
Establish clear policies and objectives
Investigate technical training and development opportunities for employees
Establish clear policies for the use of credit cards
Revisit (but not necessarily cancel) the work-from-home policy
Added a position focused on budget development, while monitoring the comings and goings of finances
Addition of an internal audit position in the general manager’s office.
Creating a “Who to call” list
Training financial staff on the software
Implementation of an acquisition card program
Development of an annual audit plan

Baker Tilly representatives noted that these recommendations could not be implemented quickly; in fact, it would take a long time. However, they will then provide the City with an implementation guide.

“Thank you all for the depth and quality of this presentation,” Meyer said. “You have identified many ways to improve…. and a number of policies and procedures need to be significantly improved.

The mayor agreed that implementation would be a slow but necessary process.

“I think your recommendations are complete,” he said. “And I think that’s a great roadmap.”

Commissioners read a resolution honoring local citizen Rudy Ramirez-Roblero, for “appreciation of his acts of bravery and citizenship in assisting members of the Covington Police Department.”

On June 3, Ramirez-Roblero was leaving a religious event in the 15th and Russell Street area when he saw a police officer arrive, get out of his police cruiser and chase a suspect during an incident. Another suspect, Breanna Wright, then entered the police car with the intention of stealing it.

Ramirez-Roblero then put himself in danger by removing Wright from the car.

“He parked the vehicle and waited for the police to come for a report,” police chief Brian Valenti said. “His actions were above the call of duty as a citizen.

“Rudy Ramirez-Roblero’s actions epitomize the best of all citizens of Covington.”

• There is currently a deficit of $1.7 million in the general fund, but Webb noted that taxes will be collected in the spring

• General revenue ahead of last year

Commissioners approved the plan for the city’s ARPA-funded Mortgage Assistance Program, which will use $500,000 to help potential buyers reduce mortgage interest rates or pay down payment and closing costs associated with the purchase of owner-occupied or vacant homes in eligible census tracts, or QCTs.

City officials said the program would be run the same way as the HOME down payment assistance and CDBG home repair programs. The goal is to increase the number of homeowners in QCTs, which are defined as census tracts in the city where 51% of the population earns 65% or less of the region’s median income.

Commissioners approved a sub-recipient agreement with the Building Industry Association of Northern Kentucky for tuition and expenses, and building stabilization expenses, associated with 1515 Madison Ave. – which will be used as a working laboratory for the Covington Academy of Heritage Trades.

Previously, the city set aside $250,000 of ARPA funds to support the development of the new Covington Academy of Heritage Trades. As a sub-recipient, the Northern Kentucky Building Industry will deploy funds to stabilize the building and cover tuition and supplies for Covington residents who enroll in the workforce training program. ‘work.

Commissioners approved a $69,500 contract with Emersion Design LLC to provide a design for the Covington Walkway at the Clay Wade Bailey Bridge.

In 2019, the city’s economic development department hired Garner Economics to complete a strategic plan, and one of the recommendations was to improve walkways to the city, which would include new signage initiatives, landscaping and embellishment.

Commissioners approved a proposal to amend the Neighborhood Development Code to add kennels as a conditional use to Limited Industrial Districts.

The Neighborhood Development Code’s Limited Industrial District (LI) was developed for “low to moderate impact warehousing, wholesale, and manufacturing uses,” city documents say. “This neighborhood covers many areas adjacent to the railway in Covington. The recommended text change would allow kennel uses that receive a conditional use permit to operate in this district as they are suitable for the large format buildings associated with this district.

The Covington Police Department has been approved to receive a $157,180 grant from the U.S. Department of Homeland Security’s Port Security Grants Program — along with a city matching ($52,393).

The funds will be used to expand the Riverfront Commons camera program west, “from Madison Landing to just east of the existing Brent Spence Bridge,” city plans say. “This will add 18 additional cameras along Covington’s Riverfront Commons hiking and biking trail.”

Commissioners approved the use of ARPA funds under a contract with the Covington Independent Public School District to carry out a pilot program with JE Biggs families that “features and measures the impact of City-provided iPads and early literacy apps on participating children’s kindergarten readiness,” city documents say.

The program will use $73,334 for Read Ready Covington’s “iPad Technology Pilot Program,” which the Covington Independent Public School District will use for three consecutive school years. The project will monitor the impact that city-provided iPads and early literacy apps have on two classes of 4-year-olds and their families at JE Biggs Preschool.

The school district will provide technical and instructional support, and the program will begin immediately after the technology arrives.

The commissioners approved the promotion of James Johnson to the post of storm water maintainer.

The commissioners approved the renewal of the mandates of: Pamela Mullins, at the Human Rights Commission; Omar Gray at the Code Enforcement Hearing Panel; Rebecca Weber on the Architecture Review and Development Board; and Matthew Roetting on the Audit Committee

And the nominations of:

Sheree Weichold to Alcoholic Beverage Control Administrator; and Kathleen Summe on the Linden Grove Cemetery Board of Trustees

The next regular meeting of the Covington Commission will be a caucus meeting to be held at 6 p.m., November 22, at the City Building at 20 W. Pike St. in Covington. The meetings can be followed live on Fioptics channel 815, Spectrum channel 203, the Telecommunications Board of Northern Kentucky (TBNK) website, TBNK Facebook page @TBNKonline and TBNK Roku channels.