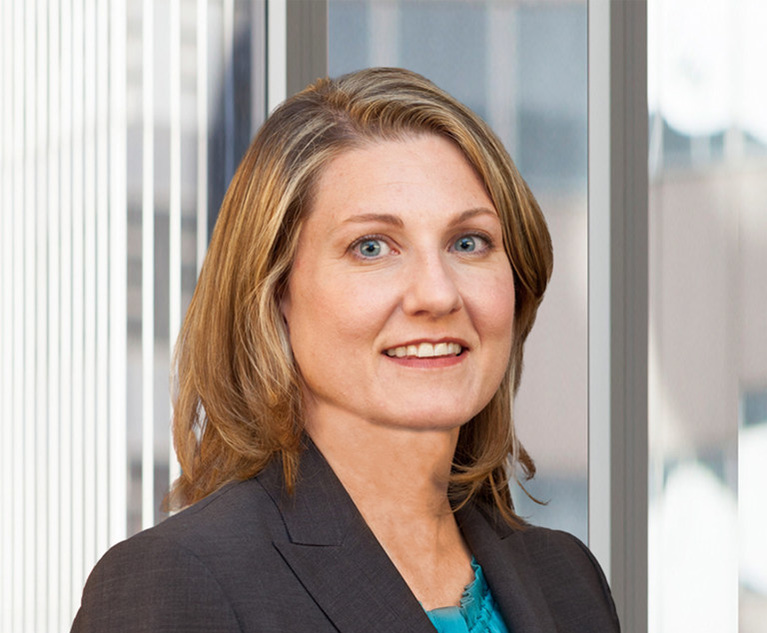 Michele Anderson joined the SEC in 1998. Since then, she has been a mainstay in the Corporate Finance Division and led many of the agency’s regulatory initiatives in the space.

Anderson will join Latham’s Washington office in mid-October as a partner in the firm’s national office, a service billed as a central resource for complex U.S. securities law issues and a provider of “clear, pragmatic and action-oriented” in US securities law. .

Anderson is the newest addition to the National Office, which was founded in 2010, is co-chaired by Alex Cohen and Joel Trotter and draws on the expertise of more than 30 Latham partners.

“We typically describe part of our function as air traffic control,” Cohen said, explaining that the national office “takes the time” to understand the SEC’s “tricky” issues for clients and ensures that the issues are passed on to the “right people” in greater Latham. law firm in securities, mergers and acquisitions and corporations.

Cohen was Deputy GC and Deputy Chief of Staff for the SEC when the agency was responding to the 2008 financial crisis. Trotter played a leading role on the watchdog’s IPO task force and served as was a lead author of the IPO provisions of the 2012 JOBS Act.

“A lot of what we do is in the vein of pattern recognition, in terms of spotting emerging trends from the SEC and what Latham attorneys see,” Trotter said. “We frequently have disclosure issues that arise from litigation scenarios, or we have transactional scenarios that touch on areas of application. We are constantly in contact with the widest [Latham] team and involving a highly interdisciplinary group of SEC attorneys.

When looking for a place to start her career in private practice, Anderson said the national office in Latham was a big decoy.

“There are other firms trying to say they’re doing something similar, but I’m absolutely convinced – after meeting people across the firm – that their collegial culture and client-focused approach “team to do the work for their clients supports this kind of thing. They appreciate it, the clients appreciate it and I’m so excited to be a part of it,” she said.

Anderson had served at the SEC for his entire legal career so far, joining right after graduating from law school in 1997, and rising through the senior ranks of the securities watchdog. From 1998 to 2001, Anderson served as counsel in the agency’s Division of Corporation Finance. For the next three years, she served as special counsel in the Office of Mergers and Acquisitions (OM&A), becoming head of the legal arm of Corporation Finance in 2004. In 2008, Anderson returned to the office of mergers and acquisitions as head, reaching the level of Associate Director in 2015, where she has remained for the past seven years.

As an associate director of Corp Fin, Anderson oversaw OM&A as well as the Office of International Corporate Finance and the Office of Structured Finance.

“I knew I could really leverage my knowledge and all of my specialized SEC experience at Latham, partly because of its dedicated national office, but just as much because it has a mergers practice. and leading acquisitions and a leading capital market. practice,” Anderson said. “I can’t think of a better fit for my skill set.”