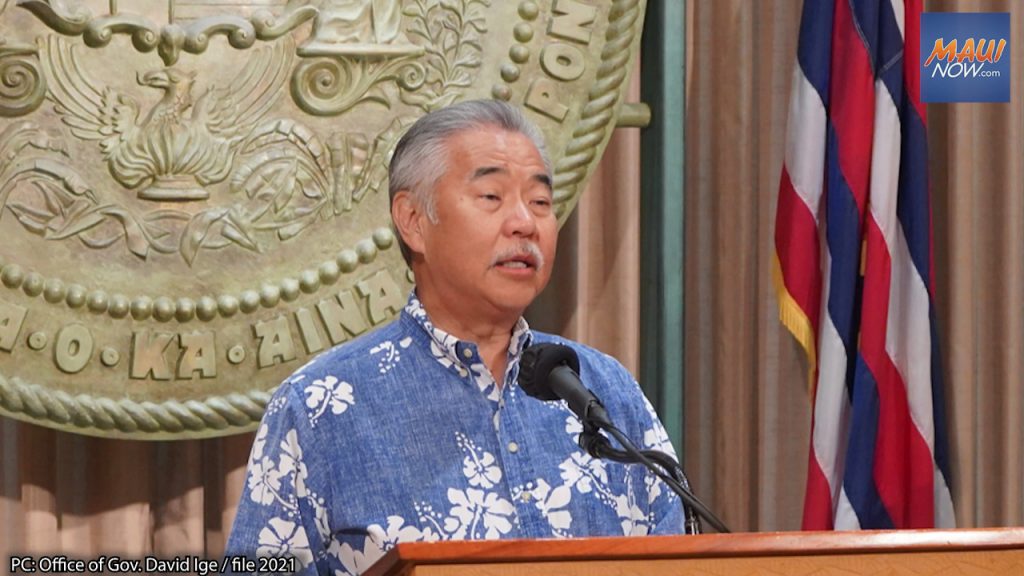 As the 2022 Hawaii state legislative session drew to a close, Governor David Ige reflected on the shift from deficits in the first two years of the pandemic to financial turnaround and restoring funding for various initiatives This year.

According to the Governor, “The Revenue Council has increased its revenue forecast each time it has met to the point of adding over $6 billion in additional revenue, forecast for the fiscal window.”

This has resulted in historic funding in some cases, including the more than $1 billion the Legislature has committed to Native Hawaiian issues.

“We believe this allows us to really begin to fulfill the Hawaiian Homestead Program commitment, as well as meet the financial needs of the Office of Hawaiian Affairs,” Governor Ige said at a press conference Thursday.

With more than 28,000 Native Hawaiians waiting for land, Hawaii Homes Commission Chairman William J. Ailā, Jr., said the work has only just begun here. “We look forward to the future anticipating that the need for funding will continue to be a priority and that the voices that stand with us today will continue to be bold tomorrow,” Ailā said in a statement.

One of the ideas that emerged was to take TAT funds and dedicate a portion of the transitional lodging tax to Hawaiian Homestead programs, which Governor Ige said would provide more sustained, longer-term funding. to the organization. He said around 10% of TAT’s revenue would be a “pretty good starting point”. According to the governor, this would initially translate to $60-80 million per year, and grow to over $100 million per year in the future.

“It’s one of those follow-up things that we would need to look at,” he said. “As you may know, the Hawaiian Home Lands program was really built over 100 years ago, on the idea that we would raise revenue from sugar leases to fund homestead programs… With the sugar cane plantations gone, I think we need to find a more dedicated longer term source of funding for the organization so that it can meet the demands of the waiting list.

Regarding the Mauna Kea Stewardship Bill, Governor Ige said, “I support the notion of mutual stewardship, which I think the House and Senate speakers captured quite well. We know there are very specific land management requirements. So I think we will review the bill and make a final assessment within the next 45 days.

The DLNR released a statement earlier this week saying the legislation “leaves significant loopholes that could lead to worse management of Mauna Kea’s natural and cultural resources.”

Governor Ige responded by saying, “The challenge is that land management is a very important issue…There is clear direction in the state constitution on how public land should be managed. So we will look at the legislative proposal and look at what is required in the constitution. »

Just last week, Governor Ige announced the state’s transition from emergency response to public health disease management, but on Thursday he expressed concern about the rise in the number of cases of COVID-19.

By Wednesday, the seven-day average had risen to 485.

“We continue to monitor COVID cases in hospitals and that has also been slowly increasing. The CDC has downgraded Hawai’i from very low to medium virus activity, so I think, and I would like to remind everyone that we’re not off the hook as far as the COVID,” Governor Ige said.

According to the governor, he is not going to consider a statewide mask mandate at this time. “But I would definitely encourage everyone to wear a mask if they’re indoors…if they’re in a situation where they can’t maintain six feet. I think we all know what works, and we have to be smart in our interactions so that we can manage and keep the spread of COVID to a minimum,” he said.

The governor encourages people to continue wearing masks and taking precautions. “We continue to make progress in the fight against COVID, but we are not done with COVID yet,” he said.

Although unrelated to the legislative session, Governor Ige responded to a question about the leaked draft opinion, which indicates the U.S. Supreme Court may overturn the landmark Roe v. Wade who legalized abortion nationwide.

“As you may know, Hawaii was the first state in the nation to legalize abortion for women in our community,” Governor Ige said. “I know there is overwhelming support in our community for women’s right to choose. So based on my cursory review of the leaked draft, they would definitely overturn Roe v. Wade, but would really allow states to determine appropriate access to abortion and family planning services.

Governor Ige said he believes women in the state of Hawaii are “in a good place” because state law gives them access.

“Give and Take” in the legislative process

When asked if funds could have gone to the Rainy Day Fund or to infrastructure, Governor Ige noted that there was already a commitment of $500 million for the Rainy Day Fund. That’s less than the $1 billion he recommended, but he still called the credit a “significant investment.”

Regarding basic infrastructure, he said the administration supports public pre-K and $200 million has been provided by the legislature to expand these programs. He said the CIP budget is doing well, with most of the administration’s priorities being funded.

Governor Ige called it a “good session”, saying, “I think the legislature has responded to the needs of the community and they have put together a pretty good package that is having a lot of impact on our community, in especially the ones I need the most”.

The governor thanked the legislature for its work this session saying the package and the legislation “address the priority needs of our community.”

The governor will take the next 45 days to assess the legislative package.