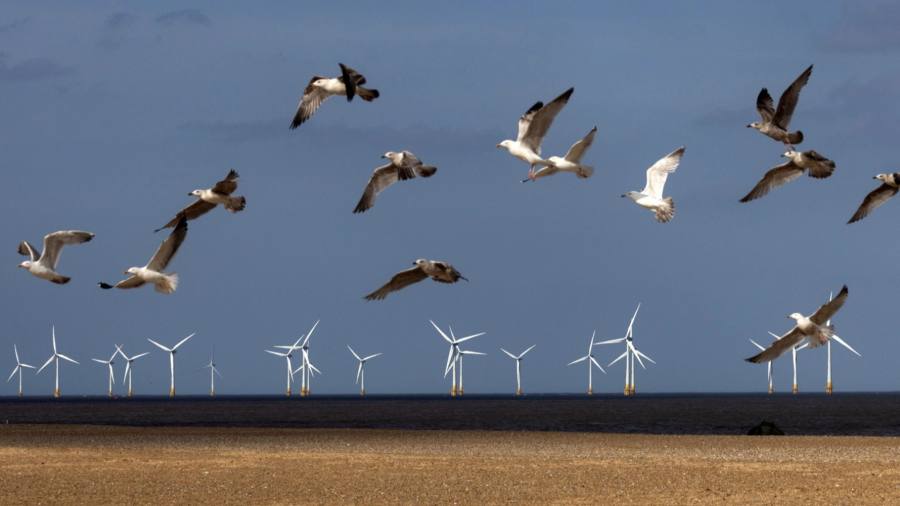 The UK government is pushing ahead with plans to cap the revenue that renewable power generators make from exorbitant wholesale power prices after Russia invaded Ukraine.

Companies producing wind and solar energy fear that the plans, similar to proposals already announced by the European Union, could in fact constitute a windfall tax on renewable energy.

Companies involved in renewable energy generation that could be affected are EDF Energy, RWE, ScottishPower and SSE.

The government had hoped to persuade power generators to voluntarily agree to 15-year fixed-price contracts well below current wholesale tariffs for their generation.

But talks with the companies have collapsed and government legislation, which could be unveiled as early as next week, will be used to underpin a revenue cap on generators, people familiar with the plans said.

As UK households face rising energy bills, the government told producers at a private meeting last week that it would pursue a cap, people briefed on the talks said.

People briefed at last week’s meeting said prices of around £50-60 per megawatt hour had been mentioned as a starting point for the cap, well below current prices of around £490/MWh, although no final decision has been made.

Ministers were alarmed at the profits made by some power generators who still benefit from a government subsidy scheme that dates back to 2002, when the renewable energy industry was in its infancy.

The government has looked at potential levels of the revenue cap using evidence such as wholesale prices before the energy crisis.

A “high percentage” or all of the revenue above the cap set by the government would go to the treasury, one of those people added.

The EU has announced a similar cap as part of plans to raise 140 billion euros in windfall taxes.

Electricity producers fear the UK government’s plans could do more damage to the sector than a one-off 25% tax imposed on oil and gas companies in May by then-Chancellor Rishi Sunak.

Its 25% “energy profits tax” was accompanied by a new investment allowance that energy companies can use to offset their tax bills if they pursue projects to boost UK fossil fuel production.

“The major problem is not that the government is creating a windfall tax of some form,” said an industry person who attended last week’s meeting between the government and power producers. .

This person objected to the way oil and gas companies hit by the recent windfall tax were granted an investment allowance and accused the government of effectively approving investments in fossil fuels rather than renewable technologies.

The government is committed to the UK reaching net zero carbon emissions by 2050.

Another industry person briefed on talks between ministers and power producers said: ‘You are discouraging technologies that you can build quickly to reduce [energy] bills.”

The Department for Business, Energy and Industrial Strategy declined to comment on the plans.

Government efforts to persuade power generators to voluntarily agree to 15-year fixed-price contracts have been complicated by how ministers wanted deals that could have an impact this winter, and most companies had already agreed to sell their planned production well in advance.

The government announced last month that UK household energy bills would be capped at an average of £2,500 a year for the next two years.

Corporate finance expert is hired by the UKSE